The first General Store opened in 1828 and carried:

There was no cash register - and very little money - but the storekeeper gave lots of credit and people always paid their account, even if it took several years! 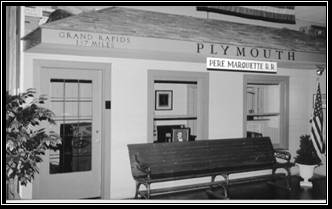 In 1871, the First National Bank of Plymouth opened in the back of a General Store on Main Street and Ebenezer Penniman was the first President.

The Plymouth Railroad Station was also established in 1871 through the Pere Marquette Railroad Company.

A dental office was opened during the 1870s by the practitioner, Dr. Pelham.

In 1882 the Plymouth Iron Windmill Company began to supply windmills and parts throughout Plymouth and the surrounding area.